The article Sagging and the skin tackled the link between gravity and drooping of the lower face. It introduced EleVastinTM as a targeted solution to gravity-induced skin sagging.
This active ingredient aims to bring support to the skin by increasing its resilience and capacity to resist the gravity pressure. Skin elasticity has been identified as the key parameter in this process.

Elasticity, what is it?

Tissue elasticity is a central parameter for the functioning of vertebrates. Many physiological functions of human tissues (especially those submitted to strong and repeated movements) strongly depend on their elastic properties: lungs, cardiac valves or skin.

In the skin, elastic fibers are the primary component in charge of its compliance (ability to be readily deformable) and resilience (ability to return to its original shape following a mechanical deformation). Their synthesis by dermal fibroblasts follows a multifaceted process named elastogenesis. It results in the combination of molecules of elastin and microfibrils under the intercession of a wide array of microfibril-associated proteins.

Elastogenesis takes place during the early stages of fetal development and reaches a peak at puberty. In adult skin, elastic fibers regenerate inadequately and the elastic capital declines with age.
External aging is also responsible for the impairment of the elastic fibers. In photo-exposed skin, an accumulation of abnormally amorphous elastin, called solar elastosis is observed as well as a complete disorganization of the elastic fibers network. This is mainly due to the activation of matrix metalloproteinases (MMPs).
Thus, during aging and under environmental stress, the amount of functional elastic fibers is reduced, and the biomechanical functions of the skin are deeply disturbed. It manifests clinically by a loss of skin elasticity.

Associated with the down pressure exerted by gravity on the skin, it leads to skin sagging and the formation of deep vertical wrinkles. Therefore, reinforcing the skin’s elastic potential appears to be the foremost strategy to correct the clinical signs of skin sagging.

EleVastinTM combats the degradation of the elastic capital. 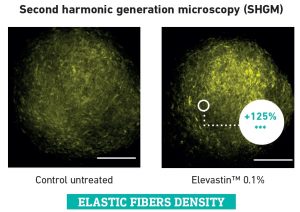 With age, elastic fibers degrade much quickly than they are synthesized. EleVastinTM tends to reverse the balance between synthesis and degradation with a targeted action at 2 levels:
– on one hand, the ingredient boosts the synthesis of key proteins for the assembly of functional elastic fibers: elastin, fibrillin-1 and fibulin-5. This property has been confirmed using various models of increasing complexity.
– on the other hand, it protects the elastic fibers from degradation by inhibiting the proteolytic activity of MMP-12.
Through this mechanism of action, it ensures an increase of the density of elastic fibers coupled with an augmented skin elasticity. These last outcomes have been obtained using an advanced spheroid model developed in our cell culture laboratory.
Want to know more? Watch this video.

Tested at 1% on 37 volunteers, the ingredient proved its capacity to reduce drooping of the lower face. Various assessment methods proved that:
– Skin elasticity is significantly improved vs. placebo
– Facial contours are better defined
– Deep vertical wrinkles are significantly reduced
A novel and original measure of the effects of gravity on facial morphology was adopted, confirming the ability of EleVastinTM to limit the impact of gravity on aging signs of the face.
Learn more about clinical test here.
100% biobased, EleVastinTM is the key active for formulators and marketers wishing to combine robust cosmetic performances with high natural profile.
Want to know more about EleVastinTM and skin elasticity? Do not hesitate to contact your local sales representative.
RELATED CONTENT

Sagging and the skin